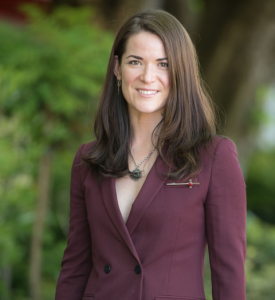 There are not many women I know who are as brave and fearless as Maja Aro, my Gutsy Girl for February. She smiles at the idea of being thrown through a plate glass window, and accepts jobs even if she has to stand outside, in nothing but her underwear, in -10°C.

Aro is well known in the Film and Television industry. She has worked as a stunt performer on Once Upon a Time, Hansel & Gretel: Witch Hunters, and The Cabin in the Woods, and now, she’s writing and directing her own films. Her recent release, Hoods, premiered at the 2016 Whistler Film Festival, and Aro won Best Director for it at the 2017 Artemis Film Festival.

Maja answered my questions at her home in Britannia Beach, B.C. Her answers give us an insight into our Gutsy Girl of the Month: 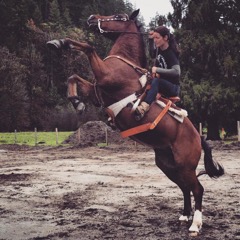 Maja, you grew up in Williams Lake, British Columbia. Were you always a fearless, all-action kid?
Honestly yes. I was always up to something ridiculous, and nothing ever really scared me. I was, and still am a very curious person, and am always willing to try anything. I know in school I was known as the kid that would never turn down a dare. I grew up having a horse (once I’d proved to my parents that I would look after him) and spent the winters at the ski hill.

You were a downhill ski racer. What life lessons did you learn from participating in sport?
I think sports in general teach you discipline, respect, and how to socially interact with many different people. Competitive sport teaches you to work hard, train hard, and how to be a good winner and a good loser. Being in a sport that is individual where you are cheering for as well as competing against your friends has definitely helped me in my chosen career. I think the biggest life lesson I learned from competitive sports is that hard work and mental stamina/discipline can get you through anything. 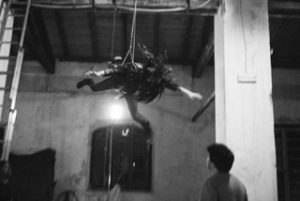 You have spoken about the metal strength needed in stunt work. Everyone sees the physical bravery needed. Can you explain why mental fortitude is also necessary?
I think that mental toughness is just as important in stunts as physical skill and bravery. Yes, you do need to have a very high physical skill level in many different athletic facets to be a good stunt performer, but if you don’t have the right mind set, all of that doesn’t really matter. Mental strength, the ability to think for yourself, the confidence to ask questions if you are unsure of something, all of these will keep you safe as a stunt performer. When I have difficult days (say standing outside in the cold not wearing much) I always make a mental game or challenge for myself, as I learned as a competitive athlete, at the end of the day you are really competing with yourself to become the best version of you. As a stunt performer I am constantly challenging myself to be a better performer, a better coordinator, ultimately a better me. I don’t compete with anyone else but myself.

Did you have a mentor, or role model, who inspired you as you were growing up?
I looked up to my ski coaches, my riding instructor, my older brother, definitely my dad; he’s always been my hero. My dad always did sports with me, learned new things alongside me, and set a great example of the kind of human I wanted to be. I also for some reason had a weird obsession with Albert Einstein. I think I liked that he failed so much, but just kept trying and ended up being this guy that everyone talks about, and he was quirky and weird which I completely related to. When other girls had pictures of heartthrobs from teen magazines in their lockers, I had the famous picture of Einstein sticking out his tongue. 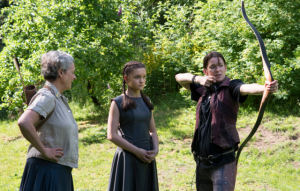 In my book, “Maddie Makes a Movie,” the main character sets out to make a movie, with a Fairytale theme. What is it about fairytales and folklore that inspires you?
Ohhh, this is such a great question! Where do I begin? I absolutely love fairytales, I love the magic, the lore, and that at the end of the day they all teach you something. I love that the originals are all actually quite dark and frightening and were a social commentary of the times they were written in. I have been lucky enough to work on a few films that were fairytale adaptations, as well as a TV show based on fairytale characters for years. I feel so lucky that through the characters I’ve doubled I’ve appeared on screen more fairytale characters than anyone.
I am truly inspired by the characters that are in these beloved and familiar tales. My first film has characters inspired by fairytales and folklore. I think they are easy characters to relate to and I use them as inspiration because of their relatability. They are all facing a challenge (even the evil characters) and must overcome it. That is the base for a good story. I am very inspired by the grit and darkness in the original fairytales; my short film Hoods that I hope to turn into a TV series is very much influenced by the dark side of fairytales.

At the beginning of a day’s filming, Maddie’s stunt performer dad gives her this advice, “Remember, when Plan A doesn’t work, there’s always a Plan B.” What advise would you give Maddie (aged 10) before a day on a film set?
Listen to the people you have around you, ask your crew questions, you never know who will come up with a good idea or a creative way to solve a problem. Also to trust her gut, it’s always right! 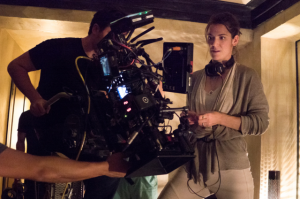 Your career seems to be going from strength to strength. What motivates you to take on new challenges?
I am a very passionate person and focus whole-heartedly on everything I set out to do. I ask about what I don’t know, I fail, I look stupid, I fall on my face (literally, but I’ve become pretty good at it) and I get up, and I realize I’ve learned things. I don’t think I’ve just gone from strength to strength; I have put in the time to make weaknesses become strengths. The journey is the fun part, and that is why I want to keep taking on new challenges, so the journey keeps going.
Knowing that I will always fail if I never try, but that if I at least try, there’s a good chance I will succeed – is one of my biggest motivators in taking on new challenges. The fear of doing nothing, or “not trying” is my biggest motivator. 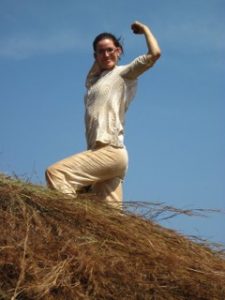 How much of your success would you put down to luck? What other factors have helped you achieve so much in the film industry?
I think being in the right place at the right time, and being the right size with the right skill set definitely came into play a lot earlier in my career, but constantly training, upgrading my skills and being super competitive with myself to constantly be better has helped me have staying power. I am also never satisfied with just being, going back to being curious, this means I’m always learning and pushing things further. I like to experiment and try new things stunt wise, and creatively I have fallen in love with writing and directing. I think not being afraid to look stupid or to try something that I don’t know much about or have never done has helped me have a very satisfying career and life.

If you could nominate one woman to be our next Gutsy Girl, who would it be and why?
There’s a few names I’d love to toss on this list, but right off the top of my head, my friend Maja Keres, and not just because we share the same first name! Maja is a Croatian dancer, who has worked so hard, and since she was a teen dreamed of dancing with Justin Timberlake. She moved to America a few years ago to follow her dream, and through hard work and determination just danced alongside JT at the super bowl this past weekend. I admire her courage, and laser focus on her goal